Sithonia is a peninsula, the middle of the three sub-peninsulas of  the Halikidiki prefecture. Its  characteristics are the picturesque areas, richly sculpted on the landscape and its developed or secluded beaches that comprise its coast.

Among the many locations of Sithonia there is the ancient town, the castle and the church of St  Athanasius at Toroni, the windmills at Sykia and the 16th century church at Nikiti. Nikiti is the administrative seat of the municipality of Sithonia. Porto Koufo is the largest cove and the most naturally secure harbour in Greece, mentioned by the classical historian Thukydides. The largest town is Neos Marmaras, in the middle of the peninsula, being the main shopping centre of the area. That is where the extensive tourist resort of Porto Karras is located.

In this paradisiac scenery, an almost straight coastline,of unique colours and pines literally drooping into water, is Elia Beach. Elia Beach is perhaps one of the most picturesque areas in Halkidiki. Between Nikiti and Neos Marmaras, it is one hour drive from Macedonia airport of Thessaloniki. It is a lushly green area where olive trees and the other trees reach the sand. It is well liked by tourists during the summer months. The most important distances from Elia Beach  are Nikiti (12km), Neos  Marmaras ( 7km ), Porto Karras Golf Club (10 km), Porto Karras Marina (10 km), Airport (95km), Hospital ( 15km), Archaeological sites (12 km). 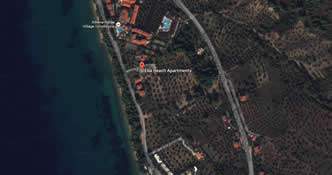